From the last post, the Saturday before last was definitely a “Me” part-ay! I bought The Hunger Games, made my Sweet Potato Stew (even gave a little to Bruno, who LOVED it), made some gluten-free brownies, and crafted to my little hearts content! My parents were out having dinner with family friends so it was just me and our pup: a really nice and relaxing day! It was definitely something I needed.

In the midst of watching Doctor Who specials, I suddenly got a burst of craft-spiration and went to work on a pair of pink/coral flip-flops I bought ages ago.

Again, following suit from Cathy at Tulle and Trinkets and the process of making the button flip-flops, I decided to use fabric instead, giving more flexibility of the material.

TOOLS: Flip-flops, fun fabric ($1 at walmart for a swatch!!), scissors or rotary cutter, and glue!

Cut strips (about 2 and a half per flip… or flop) about a half an inch wide. The swatches from Walmart turn out to be just over a foot long and I used two plus some for each shoe. 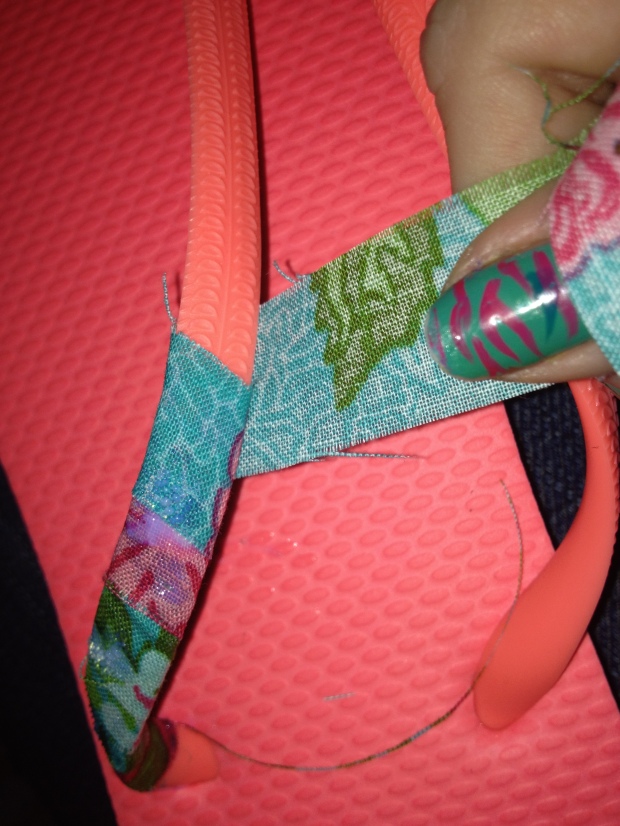 I found the fabric to be 10x easier than ribbon. Ribbon looks awesome, but the fabric is a bit more stretchy so it is easier to work with to make it fit well on the flop… or flip. (WHAT EXACTLY IS A FLIP-FLOP SINGULAR?) But continue wrapping until you’ve come to the end. I wrapped it around itself to start with to keep it snug and in place. I used clear tacky-glue to keep it snug on the band.

Ta-da! Now to just let it dry. Once dry you can go back and snip those little fringes that pop up from the fabric. 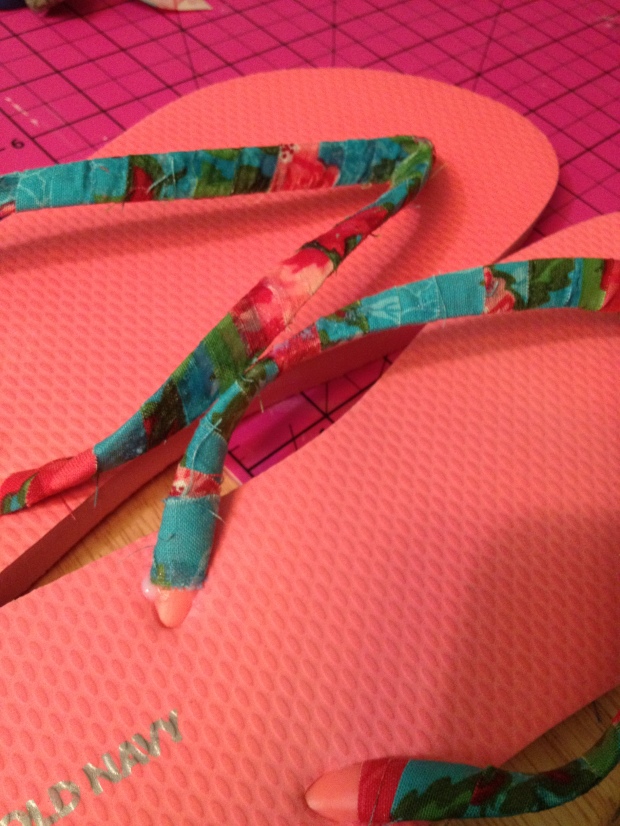 Both are wrapped and drying! Ready for bows!

To make the bow I just took the extra fabric and cut two rectangles about 3-4 inches by 6-7 inches long. I folded it like a trifold brochure hot-dog style, then folded the halves in hamburger-style so that they overlapped a bit in the middle. I took thread and a needle, sewing straight down the middle with some space in between. I only did about 4 or 5 stitches and then pulled the end so it bunched in the middle. I wrapped the thread around the middle a few times, tying knots in the back to secure the stitches. Afterwards, I took another strip of fabric, about an inch wide, and folded like a trifold again, wrapping it around the middle threaded portion. I sewed the back end until it was secure.

I glued the bows as it was a bit tough to sew when the glue had set on the bands. You can always wrap a small piece around the top and sew it on.

Ta-da ta-da! And they are super comfy. I was letting them dry so never got a shot of my feetsies in the finished product… but did before the bows:

Please disregard how pasty white my feet are… I’m rather translucent.

These are great for summer! And it’s almost over so get them in while you can!