Ok, I’m about three days late for posting this and be prepared, it’s about to get a tad nerdy up in this joint.

River Song is a character played by Alex Kingston on “Doctor Who”. Again, if you have never seen “Doctor Who” and are into the nerdy, space travel, british comedies then WHAT IS WRONG WITH YOU!? Seriously, you need to GET ON THAT. Those of you who know of River Song and know me, know that I adore the hell out of that character/woman and is pretty much one of my goals in life to be as badass as she.

Friday was the 5th Anniversary of River’s first appearance in “Silence in the Library”, an episode from season 4 with David Tennant and Catherine Tate as his “I’ll dish your sassiness right back to you” companion, Donna Noble (another favorite of mine!). Please be prepared if you watch this episode and it’s companion (ha, see what I did there?) because there are a lot of emotions. Seriously. Good luck with that.

Dad: So, how was Doctor-

Me: OMG! *bursts into tears* RIVER! MY FEELS! RIVER AND THE DOCTOR! I JUST… I CAN’T! RIVER! NOOOOO! MY FEELS!

Anywho, I decided that since I couldn’t cosplay to work (even though it was casual Friday) and it would probably be highly inappropriate to walk around calling everyone “Sweetie”, or trying to use my sonic screwdriver when my stupid computer wouldn’t work (I actually have two: River and the 10th’s) and saying “Spoilers” anytime anyone asked me where one of my reports were (Seriously, I saw a very pink psychic paper in my future if I ever tried to pull this kind of shenanigan)… all of these under consideration, I decided to marathon River’s episodes and make a lovely decor piece in honor of our favorite woman with the funny name and the fantastic space hair.

One of River’s main catchphrases is “Hello, Sweetie”. Literally. Her first line was “Hello, Sweetie.” So, I kept seeing all of these mirror decals a few weeks ago on Etsy of motivational quotes like “beYOUtiful” or something equally as “Good morning, you beautiful badass” (which I’m definitely considering for my bathroom mirror).

But I decided to make it more me, more nerdy and with a little more sonic… so “Hello, Sweetie” it was. And it wouldn’t be complete without a TARDIS. Am I right or am I right?

I used a silver, slightly metallic vinyl on a long Walmart mirror.

I stuck it to the top of the mirror and gave it a good rub down… much as I would like to run my hands through David Tennant or Matt Smith’s hair. (RIP MATT SMITH’S HAIR – no seriously, that was a really sad day for me… but not as much as hearing he’ll be leaving…) 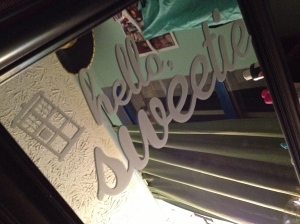 So now I get to see this when I vainly stare at myself (and more importantly, my newish booty). 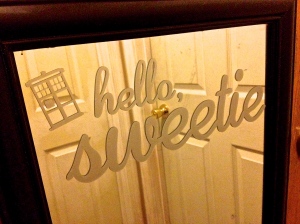 So I hope you did something to honor this beautiful badass and that your River Song day was filled with a little more sonic. 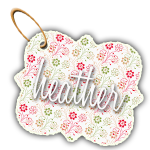